Time was, big ad agencies held sway over consumers with grandiose claims of product and service excellence. Quite often, the claims were exaggerated or downright false. But, until a groundswell of consumer sentiment hit the headlines, a grassroots activist went on the warpath, or an investigative reporter uncovered falsehoods, the ads, PR campaigns, and promotional programs went merrily on—making massive money for their clients (and themselves along the way).

Now, we have social media to serve as a global lie detector. When United Airlines, whose onetime moniker was “the friendly skies,” mistreated a passenger, it went viral virtually immediately. The list of companies caught in the social media web is long and growing longer every day.

Unfortunately, fake news, flawed data, and phony claims also are growing at alarming rates. It’s bad enough to foist a less-than-stellar product or service on the population. It’s much worse to destroy lives, falsely accuse, and deliberately spread misinformation about everything from diet pills to political processes.

While it’s all gotten so sophisticated and gargantuan in scope, the simple straightforward value of “telling the truth, the whole truth, and nothing but the truth” becomes ever-more important. When product manufacturers’ marketing claims match up with performance, everyone wins. When, on those rare occasions, politicians replace BS with the truth, it sets us all free. When a mega-corporation shines the light on their unvarnished truth instead of propagating marketing doublespeak, the beneficiaries can be legion. 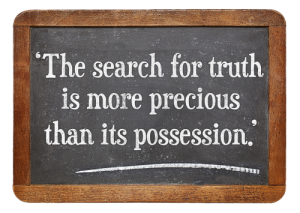 There are many to blame for the rise of fake news, flawed data, and phony claims. Among them are companies that practice capitalism without a conscience, and politicians and government workers whose lifeblood is power over others. Ultimately, however, the lion’s share of the blame lies with many US (and world) citizens dedicated to bloated excess, showy lifestyles, and a hierarchy that worships overpaid sports babies and vacuous celebrities over the real heroes in the military, teaching, public safety and other roles critical to our survival.

The biblical quote, “The truth shall set you free” needs to become a mantra. It’s time for a new type of freedom to sweep the land.

Mark Lusky, aka The Happy Curmudgeon, has voted for Democrats, Republicans and a Libertarian in presidential elections going back 30 years. As the owner of a 35-year-old, Denver-based marketing communications firm, he is a political malcontent who often quips support for “Thunder the Wonder Puppy” as a presidential candidate. (Too bad George Carlin is no longer among us to make a run—although he likely would have known better.)

One reply on “Fake news, flawed data and phony claims”

Great words to consider in todays world of news saturation.